From Boatpedia
Jump to: navigation, search 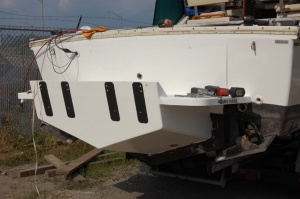 Brackets, or engine brackets, are a piece of fiberglass or aluminium which is mounted to the transom of a boat. They are generally closed and sealed to prevent water from entering. They also will provide some level of buoyancy depending on their build.

It is often desirable to move the mounting point of outboard engines aft from the hull's original transom by as much as 36 inches. The two principal benefits of this are:

The net effect of these changes is to increase the propeller efficiency (from operating in cleaner water) and to decrease drag (from reduction of submerged lower unit). This increases the potential top speed of the boat, and improves the overall fuel economy.

In addition, there are some more subtle performance benefits to this mounting technique:

An additional benefit of bracketed engine mounting is it leaves the boat transom intact. There is no cutdown of the transom for engine mounting, nor are the gunwales or aft deck cut away to form a well. The result is the strength of the hull is increased. The full transom will also keep following seas out of the boat and it will prevent shipping water aboard when rapidly reversing, as when backing down on a fish.

While it might at first seem strange to mount the engine outside of the boat, the performance reasons detailed above make a case for doing so. When the engine is moved behind the boat, it releases valuable space inside the boat to other uses. The boat's cockpit becomes bigger and more useable.

On top of all these sound reasons, there is the "cool" factor. Boats with engines mounted on setback brackets just look cool. This is probably because many full-transom, engine bracketed boats are premium designs, and the appearance of a bracket mounted engine is thus associated with high-quality, high-performance boats.[1]

There are a few drawbacks to consider with an engine bracket:

Some of these benefits or drawbacks may or may not be experienced in a particular boat. Each hull, engine, and general build of a boat is different so mileage does tend to vary.

Something to consider as well is that brackets are rarely taken into consideration when advertising the measurement of the boat. A 25' boat with a bracket will actually be 27' - 25 feet from bow to stern with a ~2' bracket. Many people say their 25' bracket boat feels much bigger than a 25' eurotransom.