From Boatpedia
Jump to: navigation, search

Anchors achieve holding power either by "hooking" into the seabed, or via sheer mass, or a combination of the two. Permanent moorings use large masses (commonly a block or slab of concrete) resting on the seabed. Semi-permanent mooring anchors (such as mushroom anchors) and large ship's anchors derive a significant portion of their holding power from their mass, while also hooking or embedding in the bottom. Modern anchors for smaller vessels have metal flukes which hook on to rocks on the bottom or bury themselves in soft seabed.

The vessel is attached to the anchor by the rode (commonly called the anchor cable or anchor chain in larger vessels), which is made of chain, cable, rope, or a combination of these. The ratio of the length of rode to the water depth is known as the scope; generally, the rode should be between 5 and 10 times the depth of the seabed, giving a scope of 5:1 or 10:1; the larger the number, the shallower the angle is between the cable and the seafloor, and the less upwards force is acting on the anchor. A 10:1 scope gives the greatest holding power, but also allows for much more drifting due to the longer amount of cable paid out. Anchoring with sufficient scope and/or heavy chain rode brings the direction of strain close to parallel with the seabed. This is particularly important for light, modern anchors designed to bury in the bottom, where scopes of 5– to 7-to-1 are common, whereas heavy anchors and moorings can use a scope of 3-to-1, or less.

Since all anchors that embed themselves in the bottom require the strain to be along the seabed, anchors can be broken out of the bottom by shortening the rope until the vessel is directly above the anchor; at this point the anchor chain is "up and down", in naval parlance. If necessary, motoring slowly around the location of the anchor also helps dislodge it. Anchors are sometimes fitted with a tripping line attached to the crown, by which they can be unhooked from rocks or coral.

The term aweigh describes an anchor when it is hanging on the rope and is not resting on the bottom. This is linked to the term to weigh anchor, meaning to lift the anchor from the sea bed, allowing the ship or boat to move. An anchor is described as aweigh when it has been broken out of the bottom and is being hauled up to be stowed. Aweigh should not be confused with under way, which describes a vessel which is not moored to a dock or anchored, whether or not the vessel is moving through the water.

Information incomplete in sections below 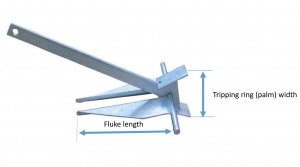 It uses a stock at the crown to which two large flat triangular flukes are attached. The stock is hinged so the flukes can orient toward the bottom (and on some designs may be adjusted for an optimal angle depending on the bottom type). Tripping palms at the crown act to tip the flukes into the seabed. The design is a burying variety, and once well set can develop high resistance. Its lightweight and compact flat design make it easy to retrieve and relatively easy to store; some anchor rollers and hawsepipes can accommodate a fluke-style anchor.

A Danforth will not usually penetrate or hold in gravel or weeds. In boulders and coral it may hold by acting as a hook. If there is much current, or if the vessel is moving while dropping the anchor, it may "kite" or "skate" over the bottom due to the large fluke area acting as a sail or wing.

Danforths are usually very easy to store in tight compartments. Light and easy to weigh, it stows flat and holds well in sand. Its excellent holding power-to-weight ratio means you can use a lighter anchor compared to other types, but it doesn’t hold well in grassy or rocky surfaces. Its flukes and stock (the wide crossbar at the top) are more prone to foul on rocks or the anchor rode.

Danforths can be a pain to set. Although they're meant for mud or sand, often times they will drag across muddier and siltier bottoms and need the captain to give the boat a jerk aft to get it to set instead of gradually backing up like you can do with a plow - particularly if the danforth is lying on its back.

A good trick with a danforth is to make a "breakaway setup." A breakaway setup consists of the rode being attached to the tripping ring with a shackle and then running the rode along the shank of the anchor to the very tip. At the tip of the shank, the rode is attached to the provided hole with a zip tie or other sturdy, but breakable material. The idea is that when setting the anchor you want the pulling power of the rode to come from the shank as this sets the anchor, however, once it is set if you can not remove it normally then you can "breakaway" the zip tie with enough force and the rode pulls on the tripping ring which frees the anchor vertically. 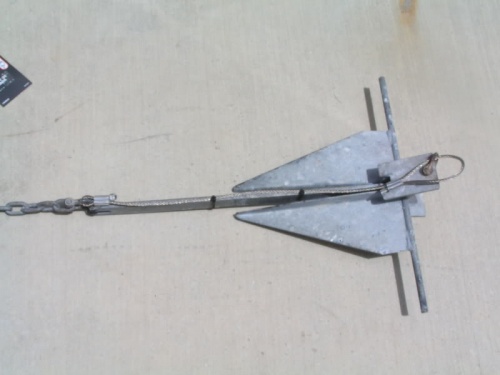 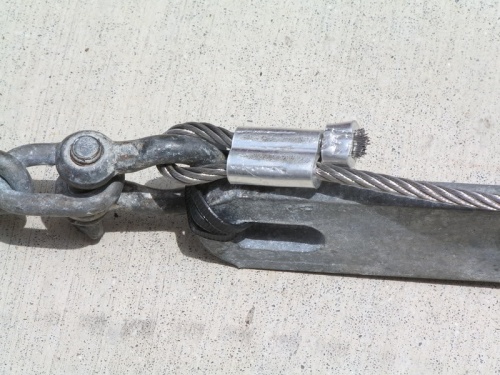 Closeup of the shank ziptied to rode